This is personal. It's my response to a letter LeBron wrote to me.

OK, he didn't really address it and lick the envelop himself. Of course I'm referring to the "letter" he dictated to Sports Illustrated's Lee Jenkins.

His words won me over. And I wasn't exactly rolling out the red carpet last week, or anytime, since his rather overblown decision a few years back. 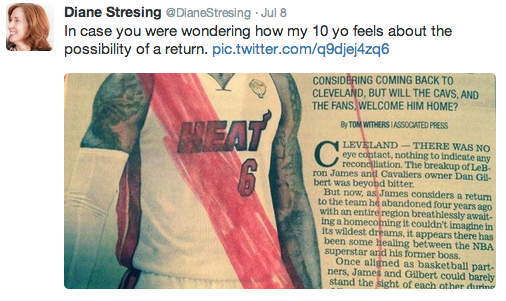 While Cleveland columnists spent oodles of time last week screaming "COME HOME, ALL IS FORGIVEN" I tweeted twice about the dude's contract options and made a rather concerted effort not to care because, hey, why should I? I'll never meet the guy, let alone know him, and in 10 years they'll be another "King." Insert eye-roll here. I'm just not into celebrities, and don't get me started on the absurdity that is pay scale in professional sports.

But that letter was really nice. If he means half of it, I'll join the chorus. Welcome home, LeBron. If you really are back to live YOUR dream - of being a better man in Northeast Ohio, well, more power to you. (If that's even possible.)

What won me over? The overall tone was good. You sound more accessible than you used to. And this part in particular, I really like:


"I feel my calling here goes above basketball. I have a responsibility to lead, in more ways than one, and I take that very seriously."

I believe words can make a difference, like you apparently believe gestures can. So, OK: You show little boys and girls in NE Ohio that "making it big" doesn't necessarily mean leaving town. I'll be hoping you live up to those - and other- promising words in your letter.

A championship, plus a little respect for my adopted hometown, would be a terrific bonus.