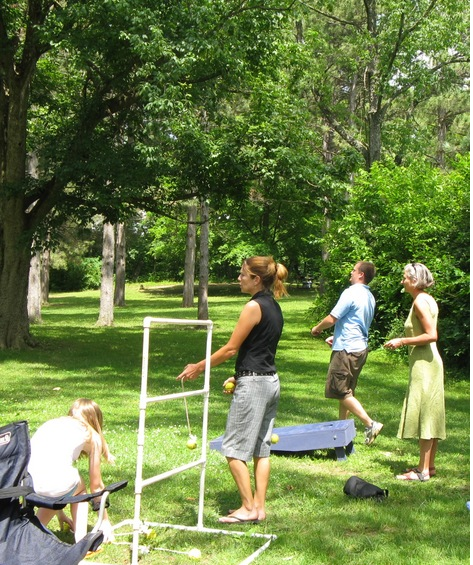 If you've been following this blog recently, you've noticed that I've archived several articles from the now-defunct Yahoo! voices channel. I've written about web content "gaming" before, and - heaven help me - I probably will again. So, in addition to archiving this 2009 article, I think this slice of history provides a good example of evergreen content that can be used to build traffic to a site or several sites. And, if you like family board games, I think you'll also find it's still pretty darned useful.

Active Games for Multi-Age Players
Over the years we've collected a great bunch of games for a wide age group - games that can be played inside, outside, and some, inside and outside. I'll list of some of our family favorites below, but first let me tell you how I pick games.

I only buy games that:
If you've ever refereed a fight between a 5 year old boy and a 13 year old girl, you know why I have to pick toys that are not dangerous!

One other thing about these games - they tend to encourage kids to get active and get moving. I love books, card games, and lots of board games (our family favorites are Apples to Apples Jr. and good old fashioned Yahtzee ) but when playing games, we most enjoy engaging our bodies as well as our minds. Without further ado, here are my/my family's favorite games:
Indoor Games
While we can happily play Balderdash (with the older kids) and Apples to Apples for hours, these indoor games are a little more active and well suited for a broader age range.
Cosmic Catch, under $20, may not be cosmic, but it sure is a great twist on catch. Players wear elastic colored bands on their hands and then try to toss the ball around the group according to what the ball says. Yes, it's a talking ball. It's also a great game for almost all ages (3 and up, I'd say) and a "codebreaker" mode adds a little more thinking challenge to the game, good for older kids. (And adults, who should remember, this is not a drinking game!)
Carpet Bocce, under $20, is a great indoor game as long as you have a carpeted area big enough to play on. (Oh - and no shag carpet!) The small plastic disks slide easily along the carpet, and rules are just like outdoor bocce ball.
Scrabble Slam!, under $10, is not really active, however, it is a little more so than the average card game and a good bit more exciting than traditional Scrabble. The object? Players race against each other to build and change four-letter words - first one out of cards wins. Yes, it is pretty darned educational for early elementary school age children, and fun for all.
Outdoor Games
Besides Badminton, bocce, and good-old-fashioned games of catch, here are a couple of newer games in our backyard:
Blongo Ball is also known as ladder golf. Blongo Ball consists of two three-rung ladder-like structures and six ball/rope throwing thingees, which sort of remind me of nunchucks. The object is to get your balls to hang over one of the rungs, the lower the better (the top rung counts as one point, the second as two points, the third three). My Kentucky cousins introduced me to the game, and I was hooked. Their homemade game set was different from my store-bought game in one important way - my cousins used tennis balls; some of the store-bought versions use golf balls. Golf balls are hard! So, we only play this game when I can supervise my five year old. 'Nuff said.
Cornhole, $100 and up, is a craze, at least in most parts of the Midwest, but I dare say it's a craze that's here to stay. Often likened to Horseshoes, it's actually much easier. My five-year-old loves it; we just modify the game for him (and other short kids that turn up in our backyard) by letting him stand close to the board. We also modify the scoring, which can be a bit complicated for those new to addition/subtraction. We simply score one point for each bean bag that lands (and stays) on the board, and three for any that fall in the hole. If you're crafty you can make your own game (CornholeCornhole.com has a nice set of plans) but I bought a waterproof, plastic game instead. A final word about ladder golf and cornhole games: they can be rather addicting, as you'll see in thisforum for tossing games.
OK, speaking of addicting games, here are some of my favorite spots to find good family games - these sites generally offer lots of active, creative, and fun games for all ages, and for the most part, they're also reasonably priced.
FatBrainToys
GameOutfitter
Kazoo Toys (visit 'em in Denver)
ToyScamp
Now let the games begin! And remember, as we say at our house, it doesn't matter whether you win or lose, what matters is that you don't kill your siblings - and that you have fun playing the game!

Posted by Diane Stresing at 8:30 AM