I think the use of both words in question - both used in quotes - was absolutely right in this case.

The Words in Question

Donald Trump said "pussy." Into a microphone, in a public place, specifically, a political rally. No duh, the press was there. And not long after, Republican Senator Lindsay Graham said (to a bunch of journalists) "My party has gone batshit crazy." 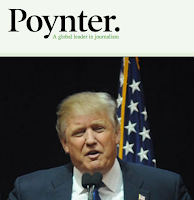 Frankly, I'd be pissed if I found out later that the journalists didn't quote either man verbatim.

Why "Those Words" Are OK Today

Look, everyone following election year coverage (and I sincerely hope a lot - all! - voters are) needs to get as much insight as possible into the candidates we'll get to vote for this fall. Word choice is important. So is passion. Communications skills. Comportment. And an ability to balance those traits...or lack thereof.

What do you think? I welcome the comments of thoughtful readers and journalists - of course - and will follow the maddening crowd (i.e., Twitter etc) for fun. And for insight because...well, it's a news channel too, folks. But we'll talk about that later.